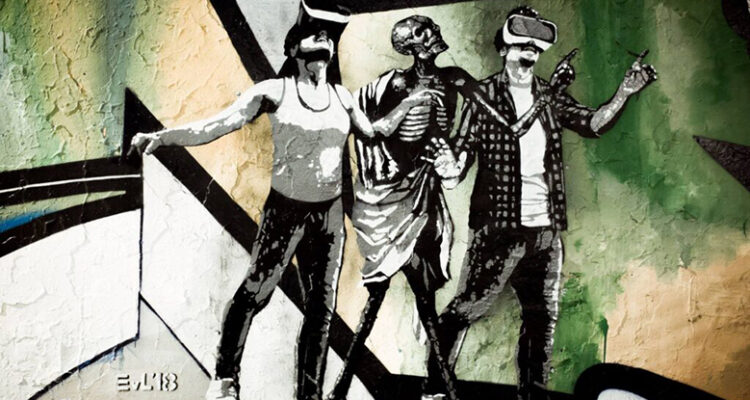 Edward von Lõngus: ‘Art is a game to me where the only rule is breaking the rules.’

It’s nothing new to talk about Edward von Lõngus, a.k.a. EvL, a.k.a. Estonian Banksy in Estonia. What is new is how his recent works incorporate digital tools in forming and presenting his street art, which not only breaks the boundary of presenting art on street walls but also breaks the traditional geographical boundary to see local art from anywhere of the world. At a time when virtual is global, the following focuses on EvL’s recent works and thoughts that, perhaps, could have resonated with different artists in a different timezone. By Shameema Binte Rahman, Language Editing by Jason Virunurm.

If anyone looks through the street art project Doomsday Cathedral with a VR set, they’ll see everything that happens on the real street wall – colour, strokes, words, figures, tag name and impression of the stencil technique – everything, in virtual form. At a certain point, the viewer can feel like a passerby looking at street art on abandoned, old or illegal walls in real life. Such is the latest digital street art project of mysterious Estonian street artist Edward von Lõngus a.k.a. EvL.

Although the inclusion of digital tools in street art is not a very new innovation in some countries like England, the United States, Canada and Australia, it is fresh in the Estonian graffiti and street art scene.

I refuse to call this self-destructing consumerism madness normal. Our society is messed up in many ways and we put great effort into ignoring our collective problems instead of facing them.

EvL got his start in the early 2000s among the first generation of post-Soviet independent Estonia graffiti. Like other pioneers MinajaLydia and TAF, he expanded his graffiti art to street wall painting in the mid-‘00s. In the last decade and a half, he has become one of the most famous street artists and his paintings have popped up on legal and illegal walls across the country.

Exhibitions, winning awards, auctions – he has earned them several times over, but he is always engrossed by doing something new. These days, he’s fascinated with Augmented Reality (AR) and Virtual Reality (VR) and has incorporated them into his art in the form of presentation – from real to virtual. For him, the inclusion of digital tools is ‘just logical to reach a wider audience and unleash a wave of illegal artistic activities around the world.’

His first digital street art project, (R)estart Reality, was created in 2017 with AR. Using an app, this project allowed users of mobile phones and tablets to see animated characters on any wall from anywhere in the world. The app is not currently in use, but the digital project toured 11 European cities in 2018 during the celebrations of the 100th anniversary of Estonian Republic. The theme of the story was a journey through time spanning the past 100 years up to the present, addressing a call to redefine the present reality and take a step into the future. The characters were from three countries: Estonia, Denmark and England and two digital nomads.

Without Banksy, I probably wouldn’t be playing this game

In the context of Estonia, which since its independence from the Soviet Union in the 1990s has declared the Internet a basic human right and over time has become a digital society; it is not surprising if digital techniques and tools are used in street art. But this change also started with EvL’s (R)estart Reality.

So how did he come up with the idea of incorporating digital techniques and tools into street art?

EvL says, ‘Art is a game to me, where the only rule is breaking the rules. The boundaries of traditional street art can be transcended by new ideas and the use of new tools.’ He then explains, ‘Even when you encounter street art in real life, what’s the first thing you do? People take out their phones to create a virtual version for hundreds of others, and experiencing these artworks online is already a virtual experience. And that inspired me to experiment with the form of presenting street art. That’s how I came up with the idea of using Augmented Reality or AR and implemented it in my first AR project (R)estart Reality.

For me, the physical body or the face are not important, what matters is the creation.

The ‘only-rule-is-breaking-the-rules’ philosophy is also reflected in his choice of how to present his identity. He has kept his identity hidden since the beginning of his street art journey. So guarded about his identity that since our first contact, he has rejected suggestions for an in-person or Skype interview and only agreed to written communication. Even in the written interview, he completely ignored questions about the timeline of his artistic journey or the possibility of gaining insight into his physical existence. Instead, he says, ‘EvL is a non-corporeal, memetic being that exists only as a collection of thoughts and ideas, replicating itself piece by piece into the minds of the audience. Like a computer virus outside of computers. For me, the physical body or the face are not important, what matters is the creation.’

Articles published about Estonian street art show that the hidden identity of the famous English artist Banksy and his street art technique – the stencil – gave a great boost to the first generation of street artists in Estonia. This most likely inspired him to keep his identity hidden and adopt the stencil as his technique of wall painting. He considers Banksy ‘the father of modern street art’, and says, ‘without him, I probably wouldn’t be playing this game.’

EvL takes some of Banksy’s street art a step further. ‘Balloon Girl’ becomes ‘Drone Girl’. Much of his work satirises and criticises capitalism and its consumer culture. He picks subjects from historical events, local and international characters, paintings from the Middle Ages and the Renaissance, and juxtaposes them within a contemporary context. For example, his 2015 piece ‘The Naked Emperor’ portraying a medieval emperor running in the nude, criticised politicians and the electoral system. Another work portrayed a historical figure, Soviet Revolutionist, Vladimir Ilych Lenin titled ‘Esteemed Businessman’: Yesterday’s communists are Tomorrow’s oligarchs / Opportunists always find a way.’ His 2017 work, ‘Follow the money’ focuses on the links between business and war.

So, what drives him to choose such themes and subjects?

EvL answers, ‘I refuse to call this self-destructing consumerism madness normal. Our society is messed up in many ways and we put great effort into ignoring our collective problems instead of facing them. The same Estonian forests are currently being burned in British power plants under the false label of green energy. So, there are plenty of reasons to resist and rebel against business as usual. In a way, this is my personal fight against the collective insanity.’

EvL’s unruly tone against capitalism continues to his second and latest VR-work, Doomsday Cathedral. Completed the year previous to this writing, it was exhibited in Tallinn Biennial 2020.

Basically, for me, it’s about entering the mind-space of the audience and keeping the balance between local and global culture

His doomsday view is manifested inside a church in a video installation comprising nearly 80 old, ongoing and newly completed images. Of these, he included his ongoing series Dance of Death, an improvisation upon Medieval German artist Bernt Notke’s Danse Macabre mural. It’s a satire of the fear of doomsday’s death and destruction with fluent postures of a skeleton’s dance. For example, one painting in this series sees a skeleton in a dancing posture with a selfie stick instead of the scythe originally held in Notke’s work. A newer work in this project is an interpretation of Michelangelo’s The Last Judgment. Instead of following the verdict of the Last Judgment – Heaven and Hell – this painting shows all people, good and bad, chasing after money.  A reflection upon a money-dependent society and the afterlife. The project’s visual environment gives the feeling of experiencing an apocalyptic church with the VR set.

EvL continues his experiment of bridging digital and physical street art; and in doing so, he’s bringing the Estonian street art scene to the forefront of technological innovation. But he wants to keep the focus in balance: ‘Basically, for me, it’s about entering the mind-space of the audience and keeping the balance between local and global culture, our ancestral heritage and the digital dreams of the future.’

Doomsday Cathedral can be seen through the below link from Noar: