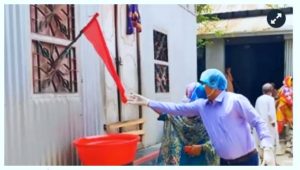 Red Flags: In order to alert the people of Bangladesh, the representatives of the government are hanging Red Flags at the home of expats as the mark of a plausible carrier of Coronavirus. The photograph was taken from Dohar, near to the capital city Dhaka. Photo Courtesy: Prothom Alo. 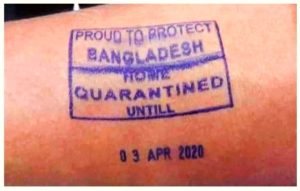 Stamping: Another marker of a plausible carrier of Coronavirus. The authorities are stamping on expat Bangladeshis’ hand after arrival at the Airport. The photograph was taken from Shahjalal International Airport in Dhaka. Photo Courtesy: bdnews24.com